VenuG Presents: A One Much Louder Lesson on Customer Feedback To Vijay Nair & NH7 Weekender 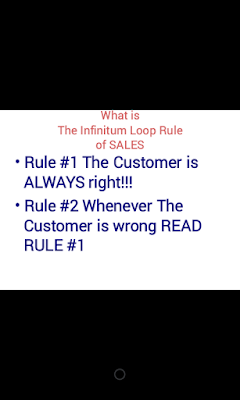 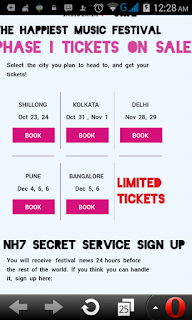 The whole line up HERE 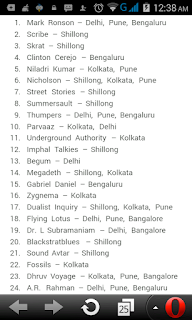 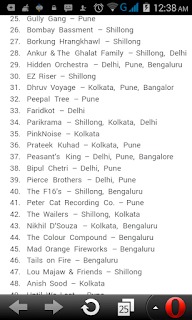 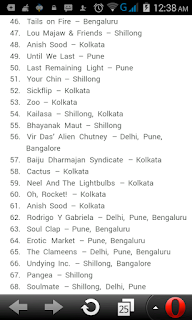 If you look at the lineup, it consists of great musicians, not only talented, but also extremely creative indie & exponents of OC contemporary "outside mainstream" bolly/Molly or any wood (Except A R Rahman)
But, But, But,
The sucker that I am for music & musicians, I passionately support indie musicians, by sharing their music, sharing their gig updates, and whenever I get the time, attend their gigs too. I have known many of them musicians & bands individually for years. But, as I ranted last year, when Parikrama(A Band celebrating their silver anniversary) was performing only an acoustic Jam session(corrected this year with acts at 3 places) & Kolkata Bands, like Cactus, Fossils performing not at Bengaluru, Pune or Delhi, but ONLY in Kolkata. Not having Bhayanak Maut or Amit Trivedi at Kolkata(Later added) & Not having International Acts (Megadeath this year is a great thing for Kolkata's Fanatic Metalheads)
What did I find this year???
Cactus , Fossils, Neel & The Nightbulbs, Pink Noise, Underground Authority the local Kolkata Bands playing ONLY AT KOLKATA!!! STUPID DECISION!!!
Also young Nishchay Parekh playing at Kolkata (Also at Shillong & My at Pune Too! I'm so happy for the kid I saw singing Mervin Gaye Blues at The American Centre Eons ago)
Now also seeing Soulmate & Lou Majaw perform at Shillong, The Raghu Dixit at Bengaluru & Faridkot at Delhi made me wild with anger!!!
Are you supporting indie music, when with such high priced tickets & a branded sponsor like Bacardi, you can't put bands, outside their home turf?
Many musicians on my Facebook timeline, might get offended by reading this blog post of mine, but hey, I've heard you all many times over. With such ticket prices, I may as well fly to Pune/Bangalore on the December 4-6 weekend and hear AR Rahman, Mark Robson, Dr L Subramaniam , Peter Cat Recording Naa? Logical no?
Further NH7 & OML have done injustice to Bands by not giving them new audience/Fans, Isn't my reasoning perfect?
Appalled I tweeted the following.
Remember Offering A Bangali Hilda(Ilish in Bengaluru or Pune is better, & Thayir Shadam to a TamBrahm in Saddi Dilli,  or Mutta Stew/Appam (Egg Stew & Hoppers) to a Mallu like me in Kolkata, or Lassi/Mattha/Makki diyan rottiyaan ttey Season Da Saag to a Sardarni in Bengaluru. This is "Ghar ki Murgi Daal Barabar"
I tweeted THIS. 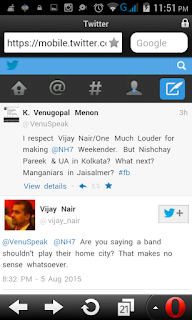 Vijay Nair's reply altogether shocked me. I'm a consumer hard to please, to me, a businessman(After all OML is a business for profit not an NGO Ya?) cannot take me for a royal ride, by giving me anything less than "VALUE FOR MY HARD EARNED MONEY"
DO YOU GET IT OML?
ONE MUCH LOUDEST ADVISE.
Better listen to my counsel,
It is in YOUR INTEREST 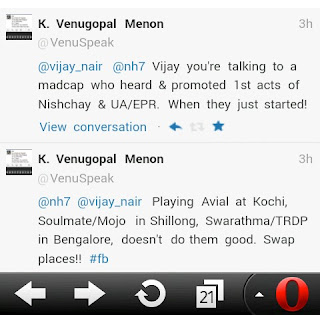 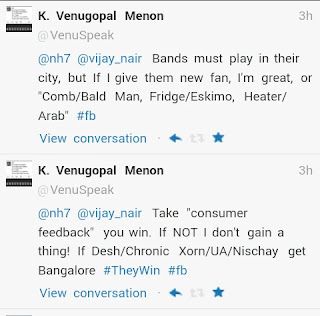 OFFERING KOLKATA BANDS IN KOLKATA IS LIKE SELLING A COMB TO A BALD NAN.
&
THE BANDS DO NOT GET ANY VALUE ADDITION BY PLAYING TO THE SAME AUDIENCE THAT ANYWAY ARE THEIR  FANS!!! 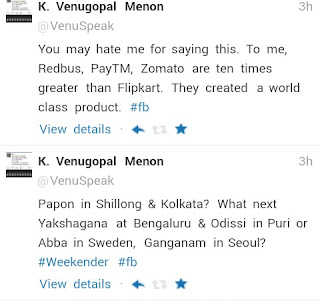 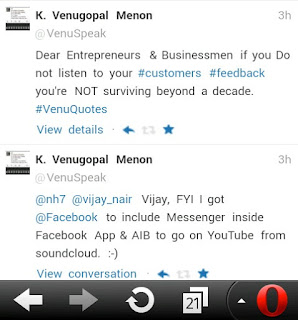 And here comes the punchline
I started with "Customer is always right & when in doubt re-read rule one!!! 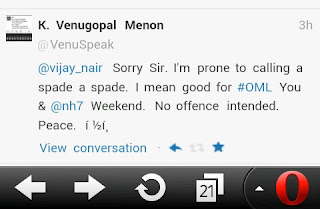 And the conclusion that, my sane counsel helps OML in the long run. I don't gain a thing if crowd get better options. If music lovers get more than their money's worth, I'm a happy man. I'm anyway a music keeda, I will anyway support indie musicians. Whether NH7 exists or not
Following, Doing, Supporting & Mentoring Musicians for 37 years now, I'm not going to change. But if along with OML, musicians gain too, isn't it a win-win situation? Does it make any difference to the costing? Not that I know of!!

Here is a live example of what kind of crazy stuff I do.
😁😁😁😁😝😝😝😝😊😊😊😊😍😊😊😊😊😊
If still OML/NH7/Bacardi/Weekender don't get it
God help them.
A guy, who trolls Zuckerberg & Get Facebook Messenger inside Facebook App itself
Can never give you an improper advise .

Sometimes a small ant can shake a mighty elephant
Aesop's Fables told us a moral
In the fable
Fox & The Crane
Moral Never Cheat Your Guest.
Watch the video. & Read how Flipkart got funded.


#VenuKiClass #influence #influencers #Timeline #Google #Search
1. 24th June, 2012 Rohin Dharmakumar's biased cover story appears online.
http://forbesindia.com/article/boardroom/can-flipkart-deliver/33240/1
25th June, 2012, Sachin & Binny Bansal write to Editor, Forbes india that Rohin's article was one sided.
http://forbesindia.com/blog/editors-blog/flipkart-ceo-responds-to-our-cover-story/
"Error 404 File Not Found."
25th June, 2012 Ashish Sinha Editor Forbes India responds.
http://www.pluggd.in/flipkart-story-on-forbes-297/
"Error 404 File Not Found"
There is a #Twitter Outrage.
I find industry insiders poking fun at Sachin, Binny & Flipkart's outrageous valuations.
Also at a Mumbai Digital Marketer, Partner at Seedfund Mahesh Murthy(whose hunches I find correct at most of the time.
They're saying "Flipkart demand of $150 million is unrealistic, they may get at the most $50 million"
I myself analyse
COD, 24 hour delivery, deep discounts(In gist pampering their #customers
I write this  "Forbes, Flipkart, Customer Service & VC Funding"
http://youthentertainmentnetwork.blogspot.com/2012/06/forbes-flipkart-and-customer-service-vc.html?m=1
FYI Facebook Acquiring Instagram & WhatsApp is the same analogy(Pampered registered users)
Hell breaks loose!!
VCs Fall over each other to Fund Flipkart.
The final tally is not $50/100/150/250/500 million.
A whopping $1 Billion.
And who reported it?
#Forbes 😘😁☝😊😝👍✌👌
👇👇👇👇👇👇👇👇👇👇👇
http://www.forbes.com/sites/saritharai/2014/07/29/indias-flipkart-raises-1-billion-among-the-largest-in-single-funding-round-in-global-e-commerce/
THE BIGGEST GLOBAL FUNDING FOR ANY eCommerce Firms including $Baba
Post 1Billion Sale fracas another #blog post
"Leave alone flipkarf, Amazon won't be able to beat Snapdeal."
Got Snapdeal $600 million.
Question: What Did I get?
Answer: I got millions of Indians a bargain & cheap products, properly packed & delivered (Though lately Snapdeal is screwing up with late deliveries & wrong products) But flilkart is impeccable & prompt plus Cash on Delivery #COD Rocks
FYI eBay has vanished
Flipkart is costlier than PayTM, Amazon, Snapdeal in most of products but in my 26 year old daughter's words
"Dad!!! Flipkart/Myntra are costlier, but deliveries are faster, safer & dependable The rest suck in comparison!!!"
#CustomerIsKing
Queen, Prince & Princess
Who are YOU Dear Moneybag?
#instaBlog
Posted by Unknown at 2:08 AM No comments:

Labels: Change, Customer Feedback, Customer is Always Right, Give customer what THEY Want, Importance of Listening to Consumers, Improvise, Infinitum Loop, Listen, Re-Read Rule One, Review, Rule One of Business 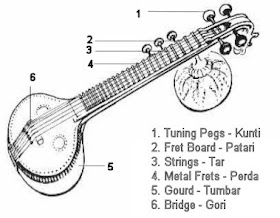 "वीणा के तार इतने भी ना कसो
कि वे टूट जाऐं
और
इतने भी ना ढीले छोडो
कि वे बेसुरे बजें"
~गौतम बुद्ध
It is strange, that, there is a move to curtail independence of the Central Bank of India, The Reserve Bank of India, popularly known as the RBI on its role in monetary policy , I.e. which basically is used to control inflation.
My latest tweet

Market Pundits Status Quo.
Sensex & NSE
Fall
Buy low NPA/PE high NIM PSU Bank Stocks.
Monetary policy is a measure generally used by Central Banks(Like RBI, ECB, US FED)
or sometimes by some regulatory body defined by the Sovereign Governments (which the Indian Government is seeking suggestions whether to set up or not {the clarification given by the Government of India last night , intends to deny of any such move)
Monetary Policy is basically affected by the following. } to control inflation using measures like hike/reduction in either the interest rate or statutory reserves to be maintained by the Banks. Also by sale or purchase of Bonds(Like QE1/2/3 & suggestion of 'tapering) by Ben Be nanke in US from 2009 & Japan in 2007 or US & UK during The Great Depression of 1930.
Rise & Fall of Inflation.


How inflation is controlled?
1 Interest Rates
2 Statutory Reserves to be maintained by Banks with the Central Bank.
3. Bond Sale/Purchase.

What is #VenuQuotes
"Inflation is a by-product of development cycle , hence a reasonable level of inflation is a necessary evil"

I have one Pro Tip to Both Raghuram Rajan & Janet Yellen.
Read what Buddha told his disciple
Excess & Obsession about just one thing causes break or cacophony.
Do NOT put over emphasis on either inflation or jobs.
Excess of everything is bad.
At the end of the day, it is meant for human race. What's the use of this hawkish stand, when there is slump in demand resulting in lack of jobs?
Reduce Rates to Rajan
Increase Bond Rates to Yellen.
Satyameva Jayate.
To Government of India, Ministry of Finance & Arun Jaitley
Keep a Hands of Policy.
India is today better than Europe, US & China, because of an independent & adamant Cebreal Banker called Dr Y V Reddy. Had he not put an embargo on mortgage loans & realty loans in 2005, India would have had 2008 contagion too.
Jai Hind.

Once, when the Buddha was told that one of his disciples was having trouble, he went to the young man’s room to see what the problem was. This young man had been born in a rich family, and he had been trained in music, so he still kept his vina – an instrument something like a guitar – in the corner of his room. When the Buddha entered, he saw the vina and said, “Let me see if I can play your vina.”
The disciple reluctantly brought it forward. He didn’t know that the Buddha had been an expert musician.
The Buddha tightened the strings of the vina until they were about to break. The disciple protested, “You are not supposed to tighten the strings like that, Blessed One; they will break!”
So the Buddha, with tender cunning said, “Oh, yes! Then should I make them loose?” And he loosened all the strings until they couldn’t be played at all. “Here, let me do it for you, Blessed One,” said the disciple, and he adjusted them. “They are now just right, neither too tight nor too loose.”
The Buddha smiled, “Yes, you see, that is what my path is: just right, neither too tight nor too loose. Moderation in everything. Temperance in everything.”


Receive the inspirational quotes and commentary of Thought for the Day every day via email.

The Thought for the Day is a daily excerpt from Words to Live By by Eknath Easwaran.

Posted by Unknown at 9:45 AM No comments: