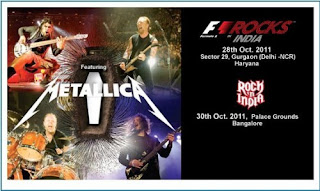 Tuned on the melody of
Nickelback's
Famous song
Hey Hey I wanna be a Rockstar :-) 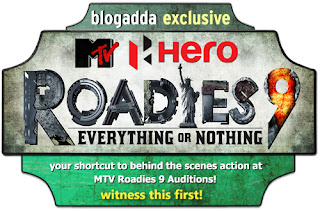 MTV Hero Roadies 9 Everything Or Nothing
What does Roadie Mean to You ?
This Blog post is Dedicated to 65% of Indian Population , who are under 35, The term used for them is " Youngistan " or " Gen-X "
They are the future ,  it is They who shall strive, work hard , enterprise and excel , which will build the future India that is ' Bharat ' . It is they who will remake ' Bharat Varsha ' into a ' Sone Ki Chidiya ' which lays the Golden Eggs !!! So with Gratitude and Humble Respect
I Thank ,
MTv
Blogadda
&
The Sponsors, who are ,

Hero Moto Corp,
and is powered by Idea. Associate Sponsors are Mountain dew, Lava mobiles, Spraymint, Ceat, Steelbird, Denver.
Cafe partner is CCD ,
Radio Partners are Radio Mirchi in Pune, Kolkata, Delhi and Hyderabad
and
Big FM in Chandigarh,
and
Multiplex Partners are Inox in Pune and Kolkata
and
PVR Cinemas in Delhi, Chandigarh and Hyderabad.
for their massive support towards the Youth of this country ,
in helping them aspire for the Pinnacle of Glory ..
Jai Hind !!! Jai Bharat !!! Jai Youngistan !!!

WHAT DOES MTV MEAN TO ME!!!
Well another question What does MTV mean to you ?
The Best way to keep in touch with MTV HERO Roadies 9 is via Facebook Fan Page , which you can join be clicking HERE
Well ask me a Music Nut-case, a guy who gives his 247365 for music, for who life is music & music is Life MTV is Music Television !
I had watched MTV on video tapes brought by Americans and Japanese long before MTV came to India via Singapore or was it Hong Kong ? In the late 80s early 90s then it wound up Remember ?
Do these names ring a bell !!! ? Nonie, Danny, Nadia, Angela, Sally, Mike, Kamal, Rahul, Donita, Jamie, Ganesh, Sonia and Shannen !!! ??? Well they were V J's I was in late 20s early 30s.  Music was my passion , my daughter was very small and we had time. Cable television had just arrived in Jaipur, and Me & My wife Shree were music Fanatics & we still are.. & not only me, There are millions of our generation . don't believe me ?
CHECK THIS
There is another reason why I love MTV  the crazy ads and the way they designed MTv the Logo with animation. Rajesh Devraj a Jaipur Dude was one of the designer of early ads like the Dosai Ad or was it {V}
You must be
thinking !
This man is
BORING US!
I'm not THIS :-)
Don't you want to do this to me?
Is it ??? You Know what the specialty of MTV was apart from Music ?

We need to Understand that  anywhere in the world, the MTv Creative s would be the best in the industry !!! They created the most artistic Logos .
WHAT DOES Roadies MEAN TO ME!!!
Around 8 years Back MTV In India started dropping M from MTv They brought about many shows in 2003 they started a show Called Hero Honda Roadies !!! And do you know who won It ? This young Man ( picture by k Venugopal Menon) 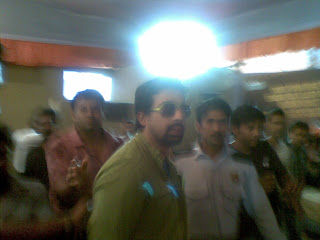 His Name is Rannvijay Singh Singha ! The 1st MTv Roadie auditioned from where La ? Guess ? He is from Delhi But but but ... 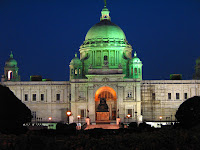 He auditioned from Calcutta or Kolkata Poshchim Bongo !!!
In case you want to know details of past winners from Season 1 thru 8 its here  ,
and if in more detail then here .
My Favorites of the 8 held till Date are @bani_j @RannvijaySingha Ashutosh ( he was a small town boy due to his Handicap !) thats y hes above Ayushman ( Ayushman is very pleasant and jovial & confident orator ! ) Aanchal Khurana ( for the devil may care confident Gaali-Galoch Dilli Gal approach  , C'mon guys it is Roadies not Swayamwar Ok The toughest one wins in dog eat dog situations )
Why Bani Judge over Rannvijay (Cos She did not win !!!) ? Because she didn't win and because she is the real women, I must if I ever meet her Mom give her a big hug for bringing her up with ethical values, it is better to lose gracefully than to win cheating , in the end loser wins the game of life !!!
Now I was asked by Gayathri of  Viacom had asked me for MTVCokeStudio Mini-cert at Tantra in the evening, and I was allowed to do this blog at my request by @blogadda Harish Krishnan asked me to Reach and my reliever wasn't available a Metro fracture Happened at Dum Dum,and I was Delayed by 2 Hours, in between Gayathri and Harish frantically called are you coming ? I was stuck in the traffic. I wasn't worried , as my Blog had another aspect of The Roadies , which i could do when I wanted , where as their was @Aagan86 A.K.A. Agnivo Niyogi a student from Kolkata who was there, so Blogadda had an awesome coverage, With Agnivo I was confident he'd do a great Job and he wrote
MTV Roadies – the auditions get hotter
My only disappointment is I couldn't have THIS  I had told @bani_j that I'd be in touch with her but Alas Kolkata Metro & Traffic Jam I Missed Raghu, Rajiv , Bani & Rannvijay of Course Gayatri who I would meet in the Evening for Coke Studio at MTV mini-cert. But hey guys you needn't i get links to everything and anything for you :-) Here Check this Fundoo Stuff HERE , Raghu , Rannvijay , Rajiv , Bani and Prachi great Pictures @ the Kolkata Audition .


Roadies, to me is Motorbikes , Indian Motorbikes, That too earlier Hero  Honda and now Hero. Means emotions, Drama , fun , adventure , travel , food , places , challenges, pressure , managing stress, leadership , keeping sanity under stressful conditions. In all a Roadie is in my Terms " A BORN LEADER "

MTV Hero Roadies ( Then MTV Hero Honda Roadies ) started in 2003 and this is the 9th Edition. People from Delhi , Chandigarh and Kolkata take great deal of interest in the show and trying to win it.

Actual talk about the Roadies
Kolkata Audition
My treatment of the audition is purely of a Mentor, motivator and youth space specialist , I have a knack of identifying people who are confident and supporting them  and more so finding who are nervous and mentoring , supporting and motivating them , my video footage amply demonstrate that I enjoyed being as much as the contestants , Raghu , Rannvijay , Rajiv and Bani did,
Without boring You much I'd get down to Business .I reached at Swabhumi  Heritage Park ( Map) 2 hours late , by which time Bloggers had left , And I reached Swabhumi and was guided by this Young Man .. What a welcome !!! 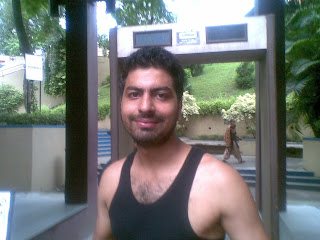 Mohit Arora Bike Modifier from Chandigarh who looked every Inch a MTV Roadie 9 :-)

Now Mohit Arora is a Bike Modifier well built and looked every inch a Roadie !
On detailed questioning he told that he was from Chandigarh t& that in case he fails here ,m he will try again at Delhi and Chandigarh, so in a sense , he is a serious candidate , well mannered Punjabi Dude, well built , well mannered ( too much for Roadies , thats my view hes very respectful like a typical Jat Sikh boy)

Then I met Ajit Singh in front of Inox who guided me to the right place look at his Tattoo , I took care I captured every inch of it for you. He is a B.Tech from ICFAI . 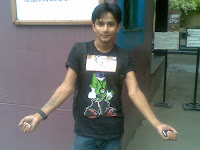 As I entered the Scene ,  I was in front of a Huge Hall , full of young boys and Gals a Ferocious Photo of Raghu and Rajiv Wanted in America :-) They looked so ferocious that I kept refferring to Rajiv as Rahul Ram (Indian Ocean Singer) :p 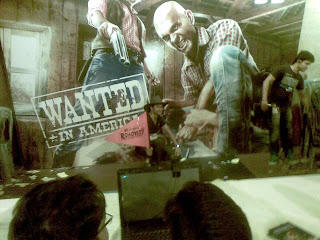 The Crowd looked a cross between Howrah Railway station and Bhawanipore College . There was fun and Cacophony , but Crowd was well dressed , and great looks , style and couture was on show  . 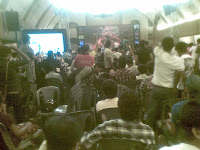 My experience was by far the best I suppose among all the Bloggers. I AM SURE ABOUT IT :-)
Here I was 51 , married with a 22 year old Daughter , ( and her college mate was one of the participant ! ) talking to Youngistan , and Talked Hell I did , Interviewed Kick-ass as well as Rannvijay or Bani ( though not as Raghu & Rajiv I cant match them ) And Imagine I have no photograph or video of Mine , I was so engrossed in the Contestants that I forgot to get myself pictured with Ferocious Raghu Poster :-) 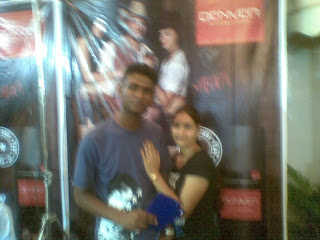 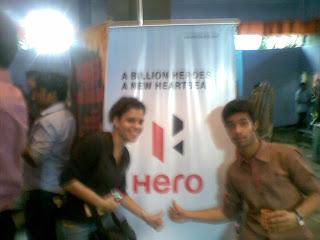 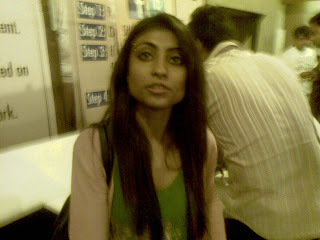 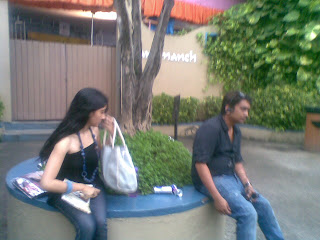 MTv Hero Roadies 9 Aspirants Unnamed Gal who was late,
&
a Great Pravasi Mumbai Bangali Surjo Mitra , From the MTV Production Team.
It was lovely to talk to you dude :) 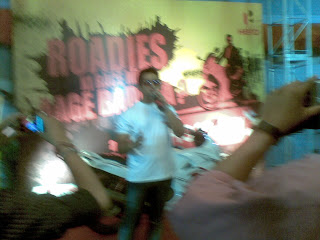 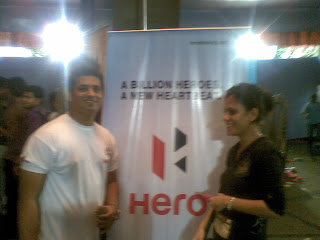 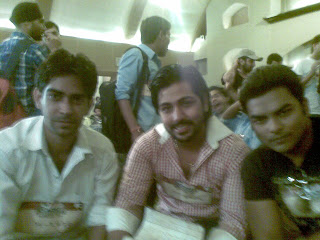 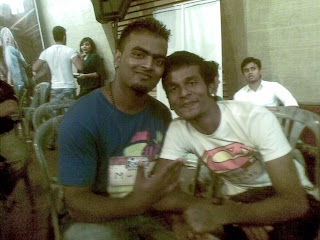 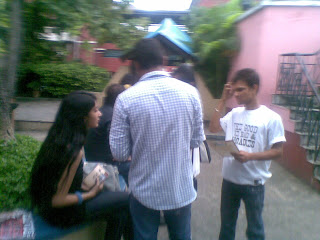 O O O .. Mysterious Girl I wanna get Close to You !!!
Oh Yo Oh Yo
Something you said that you will do to me
But I will wait till it is my Turn
I'm not the kind of Boy who gives up just like That
Oh No Oh No
What Hair you Gat Sigh !!!
I'm not young anymore
Tum Late Kyon Ji Aai
Batao mere ko
But you did the right thing Girl
You concentrated on your Job
Oh Go , Get set Go
The Girl, though very late
My Ode to this Beautiful Young lady, with such unblemished skin & wonderful Bangla Long Hair
My version of Mysterious Girl by Peter Andre & Blondie's The Tide is High
JoccuTailed into a Parody :-)
Almost at the end
18:00 hours But thanks to Surjo Mitra :)


I Met more than 100 youngies , boys and girl , also some of the event management team,  15 of them are now my Facebook fraands ( just kidding) , 1 on twitter !
I interviewed many on video and Talked to Nancy and Nimisha  ( off the record ) who seemed to be very mature and confident individuals All of them were !!! The names of the guys and gals i talked to are


CLICK LINK FOR DETAILED VIDEO INTERVIEW
Thank You, Gayatri (Viacom) , Harish Krishnan(Blogadda) & Blogadda .. I'm deeply indebted and honored to do something I loved to do , It is indeed an Honor to do this Blog
Shubh Ratri
Kolkata
12th October 2011
Posted by Unknown at 4:02 AM No comments:

Posted by Unknown at 3:33 PM No comments:

Posted by Unknown at 2:47 PM No comments: