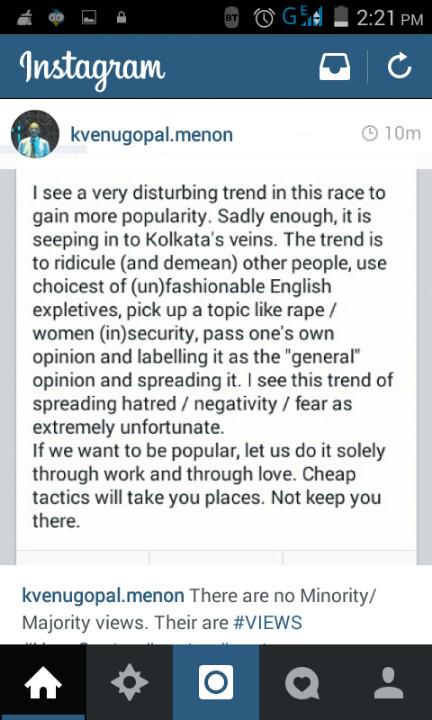 This is #MyView Counterpoint
👇👇👇👇👇👇👇
I'm reacting my views on your views. I respect yours.
"I see a very disturbing trend in this race to gain
more popularity. Sadly enough, it is seeping in to
Kolkata's veins. "
Well everyone wants to be popular, while some are brave, do, and get popular, the shaky, procrastinate & brood hence miss the bus. Not specific with Kolkata.
" The trend is to ridicule (and
demean) other people, use choicest of
(un)fashionable English expletives, "
Agree, using expletives never wins an argument.
But having a diametrical opposite & correct view may not mean to demean.
" pick up a topic
like rape / women (in)security, pass one's own
opinion and labelling it as the "general" opinion
and spreading it."
Well, The current ruling party, has a 2/3rd Majority at 31% vote share, whereas UPA with 39% had to run a coalition. An opinion is an Opinion. Example, DMK/AIADMK view in Sri Lanka Tamils, is a minority view, if you look at India as a whole, but , if you look it as entire "Dravidian Population" is a majority view. To a Tamilian Tagore may be incomprehensible, an to a Bengali, Sangan Age Literature of 6th Century BC French.
To BJP The Word Hindu is a majority, but as per Historians, Dravidians & Tribes described as "Dasas" are the original Inhabitants of Sindhu Ghati Sabhyata(Indus Valley Civilization) And Inhabitants of North India are all Aryans from Macedonia or Foreigners. There is no majority/minority view. There are views. We should travel, understand & respect all cultures, not impose ones beliefs on others. Other adopting it on own study is his/her choice. Say I'm a PSU Employee, in Bengal, If I speak or read Bangla, I must be appreciated, but if someone does not want to learn Bangla, they must never be ridiculed, insulted, derided or discriminated against(though it happens) Further, speaking ones mind against injustice, Crimes, wrong practises in the society is NOT wrong but LAUDABLE. Or else, there won't be Gandhi, King, Mandela, Vinci, Copernicus, Socrates, Kailash Satyarthi or Malala Yousafzai! This is for your 👇👇👇point.
"I see this trend of spreading
hatred / negativity / fear as extremely
unfortunate."
"If we want to be popular, let us do it solely
through work and through love. Cheap tactics will
take you places. Not keep you there."
☝☝☝☝☝
One man's food is another mans poison .
Conclusion:
Mainstream, Fence Sitters, Diplomats, never achieve revolutionary changes,
History proves, have given historical examples above, change is brought ALWAYS,
By those Radical Thinkers, who stick their neck out & take a radical view, against a dogmatic, traditional, conservative status quo opinion to make world a better place to Live. 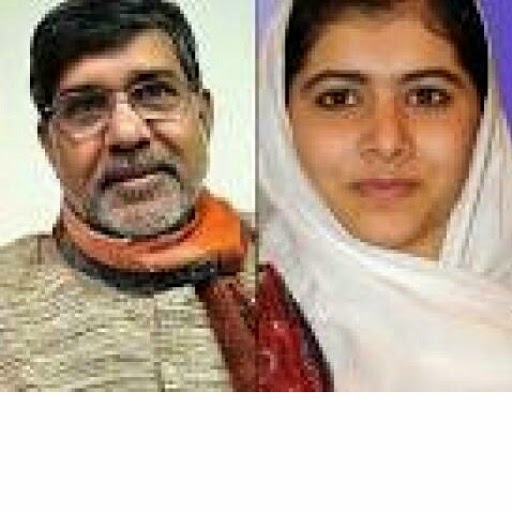 Just this week, Kailash Sathyarthi, from India, who worked to achieve right of childhood for child labourers, who said "Small children, are made to stich and manufacture, the Footballs, which, they are never able to play with, in order to save on cost of labour, while there is a huge army of able bodied unemployed all accross planet earth!"
And Malala Yousafzae, a 17 year old young Pashtun GIRL, from Swat Valley Pakistan, beat the bullet, survived & is fighting for the rights of girls to study in Conservative Islamic Pakistan, to fight for the right to education & going to school for girls.
Her statement "Why is it easier to give guns, than books? Why is it easier to build tanks , than to build schools?" These views are radical, for countries, & firms manufacturing & selling arms and ammunition, as well as, for conservative &,dogmatic  society all over the world. And they both won a Nobel Prize JOINTLY!!!

What you think, is spreading fear, hatred, negativity, might be a Tahrir Square, Pink Chaddi, Jasmine Revolution, Eve Ensler, LGBT movement, Article 377, North Koreans Hacking Sony Pictures, Wikileaks, Edward Snowden, Sec66A. Opposing views to the mainstream POV is not minority view, but personal freedom, conviction and point of view. #POV It is never understood by the masses, as that minority view is ahead of times  . Study the Life of Picasso, Andy Warhol, Steve Jobs, Jim Morrison, Dev Anand, Guru Dutt, D H Lawrence, Socrates, Copernicus, M F Hussein, Ravi Shankar(Sitarist) Sadat Hassan Manto, Ismat Chigtai & Krishna Sobti. They all were ahead of their times. In Life, they were misunderstood. In death revered. There is no Minority/Majority view, there are #VIEWS
Posted by Unknown at 2:35 PM No comments:

VenuG Presents: What is the difference between intelligence, brilliance and talenr With examples.

With Malice towards no one.

#VenuGPresents : #Intelligence
#Talent & #Brilliance what is the difference?

The status struck me.
Though I was _on the same page with her on what she said
" The poor label is only in material terms. They are rich in other essentials"
My disagreement with her categorising "Intelligence" "Talent" Brilliance" in one category.
IMHO my POV is
Those who use their Talent & Brilliance intelligently, succeed among the masses, and make an awful lot of money.
Where as pure brilliance & talent is highly misunderstood , unpopular among the society at large, as they consider these brilliant & Talented people as dysfunctional. It is a fact that all highly creative , talented & brilliant people are misfits in the traditional society, and their ideas are way ahead of times, and the general masses are unable to comprehend, understand or grasp their content. Hence if brilliant & talented people are counselled by Mentors and Guides, these protégés to be smart & use their talent intelligently, they would make loads of money too.
Its easier said than done, as these brilliant people are generally an bundle of contradictions, and often live in their own world. To get them out of their shell & to make them vomit their inner feelings is an art known to only those who are persistent, perseverant & patient.
These brilliant people, though misunderstood in life, are highly popular in death.
Examples: Netaji Subhash Chandra Bose, Kurt Cobain, Amy Winehouse,  Jim Morrison, Brian Jones, Jimi Hendrix, Joan Baez, Guru Dutt, K L Saigal, Silk Smitha, Elvis & Mj AKA Micheal Jackson. They live from here to eternity in peoples mind forever.


Here is my ex tempore POV on Jyothi's Status.
These are my views. You may disagree. Please do not confuse intelligence ( which is a negative connotation of talent like Smart) with #IQ or intelligence quotient. IQ is inborn like talent & brilliance.
Additionally every human being born on earth has some talent.
It needs to be discovered, nurtured & promoted.


Further the examples given here are all those who I like immensely. The examples given are in no way to denigrate anyone. They are shown to indicate & explain the difference about semantics. I'm sure many of you might disagree with my treatment of the word " intelligence" I respect their POV but this is mine  So respect it please.


Intelligence cannot be categorized with Talent, Brilliance. Mick Jagger & Paul McCartney are intelligent. M F Hussain was intelligent. Brian Jones, John Lennon , Ganesh Pyne were brilliant & Talented.
Salman Rushdie is intelligent, V S Naipaul is Brilliant.
Chetan Bhagat is intelligent , Sidin Vadukut is brilliant & talented!
Rihanna is intelligent, Amy Winehouse talented & brilliant. Michealangelo was intelligent, Leonardo Da Vinci brilliant & talented.
Brilliant & Talented are perrenial. Intelligent make money too. That's the difference. Intlugent people are Pragmatic & Smart, to change & adjust themselves to suit the market demands & make awful lot of money, whereas the brilliant like Kurt Cobain are always revered by the practitioners of that field. :) You may disagree, but that's my POV. I advise my talented protégés to be brilliant, but to be pragmatic & intelligent too. My tips to them always hover around "How to get people notice you" Here intelligence & smartness as well as pragmatism enters. Or else, you end up the same fate as Cobain Winehouse & Jones. #Number27 were all brilliant but not intelligent. What say you??