Be Positive A motivational story

Be Positive
It is very easy to point out mistakes.
It is very difficult, to appreciate someone/thing.

Long long ago, there lived a young artiste. The artiste was a fine young man, with the finest skill of pencil sketching. Though there was nothing in the young artiste, that was lacking as far as the artistic skill was concerned. The only issue with him was, he lacked confidence and belief in himself.

One day , he drew a sketch of  Darth Vader ( Darth Vader mentioned here because, I am going to insert a pencil sketch by my son , Dhruv. He drew it when he was 14. Now he is 15. ) , but he was not sure if he had drawn correctly , or impeccably. He though the best way to find out , if his creativity was good or bad, he ws struck by an idea, to put it on a busy street, where lot of people passed through every day.

So he took a copy of that sketch and place it on the centre of an intersecton, with an aerosol can filled with black paint. besides the painting he put a sign which read thus :-

Dear friends, I have done a pencil sketch of Darth Vader from the film Star Wars, but am unsure if the sketch is perfect or erronuous!!!
In case you find any error, PLEASE POINT OUT MY MISTAKE BY ,
please spraying colour , from the aerosol can placed under the painting on the stoll

after this he stood by the side of the road and watched , what people did. In an hour or so, a lot of city folk did stop by, have a look at the sketch, ponder, and depending on, whether they found an error or not acted, as per the artist's wish. After an hour the sketch was like 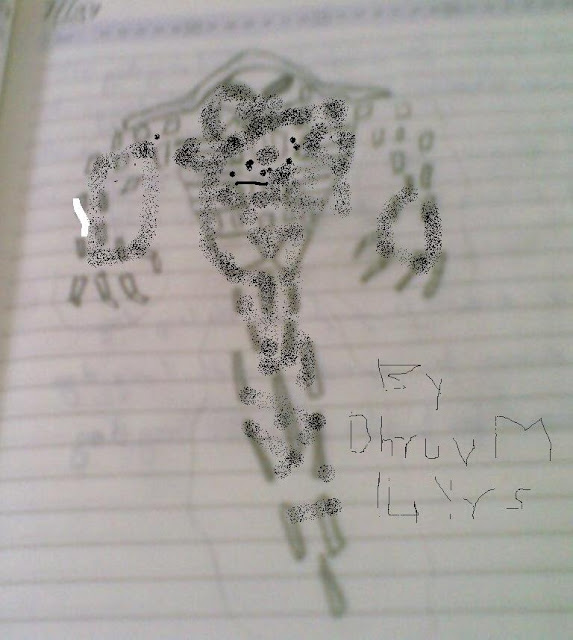 Of course, the Artist was very dissappointed and sad.

Now this was natrual, for any artiste, his every creation is like his baby, his own child, however good or bad, he cannot find anything wrong, but since our artiste had a low self esteem and lack of confidence, his persona was now visibly shaken.

There was a cobbler, at the traffic junction , who was carefully watching the actions of our artiste, while he kept on mending the shoes, slippers, bags and umbrellas of his customers. Seeing the predicament of our young artiste, the cobbler could not, but come to his rescue.

He went to the young boy, patted his back, and said, son, there is another method, of doing the same thing, which you did during the last hour, but the differrence is, in the end , the result of my method, will not only6 give you satisfaction, but also boost your low morale, aftr which you shall become a very successful artiste.

Now our young artiste was already crestfallen and hopeless, so in this state of shaken mind, he thought to himself " I have already lost all my confidence, now whatever will happen, shall not be able to further my shock, so why not try the old cobblers way.

The cobbler whispered something into his ear. The Young artiste smiled, shook his head, and quickly acted on his advise. He took out another print of the same sketch, placed it exactly at the same point, and kept it at the same angle, with the same stool at bottom, with the same aerosol can, again containing the same black paint. The only difference was, in the instruction poster he put at the side, which read thus:-
Dear friends, I have done a pencil sketch of Darth Vader from the film Star Wars,
but am unsure Of the quality of the sketch, meaning thus " HOW GOOD IT IS" !!!
Wherever you find it OUTSTANDING,
PLEASE POINT OUT THE OUSTANDING PORTIONS OF THE SKETCH BY ,
Please spraying colour , from the aerosol can placed under the painting on the stoll

after this he stood by the side of the road as he had the lsat time, and watched , what people did. In an hour or so, a lot of city folk did stop by, have a look at the sketch, ponder, and depending on, whether they found an outstanding portion or not acted, as per the artist's wish. After an hour the sketch was like
THIS 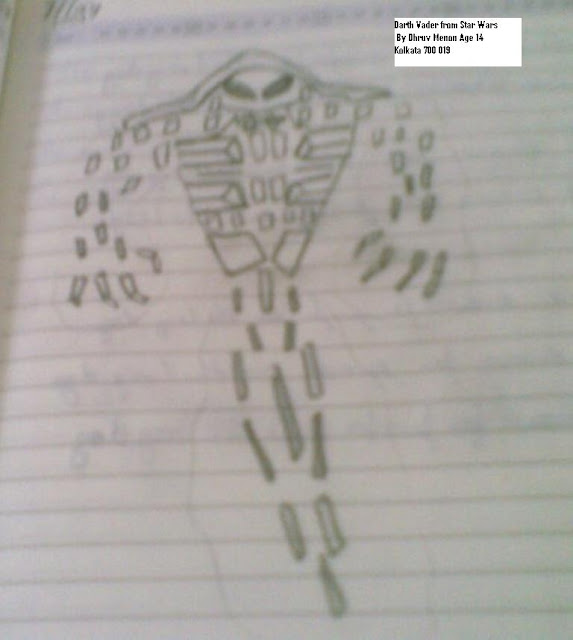 Now the excitement and happiness of our young artiste Dhruv , had no limits, he was on the top of the world, and thus began, the steady rise of our artiste, to become the most succesful artiste, who created sketches after sketches, paintings after painting and murals after , murals.

So Dear friends, The Moral of the story.

It is very easy to point out mistakes of others, but very difficult to appreciate good points of others.

SO DEAR FRIENDS,
DO KEEP COMPLIMENTING PEOPLE
LOOK AT THE GOOD POINTS, IGNORING THE BAD.

If you are a creative, your creativity is your imagination, your conceptualisation of the subject, no one on earth will be able to assess your creation, in the perfect manner, that you had conceptualised it.
Hence, Please have full confidence in yourself,
keep being creative, in the sense you imagine, conceptualise, picture and create your piece of creation.
For a Mother, however imca[able her child is, s/he will be the most beutiful child in the whole of Universe

Postscript: There is a more important reason of this post, a message to myself, Venu, stop being judgemental about creatives !!!
PHYSICIAN HEAL THYSELF !!!


This is a motivational story that I heard somewhere from someone, don't know where, don't know , who wrote it, I googled up to get the source but failed, if you know, comment and I will give the credits , to the source.
Thanks


please, this time your comments will be a hude boost to my morale, hope you follow the cobblers method :-) The 1st method can me messaged to me.